Two rogue releases are about to hit the MY masses early 2009.

First off it's Jin Hackman's Jinius at Work 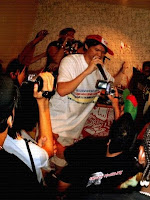 Renowned for his witty staple your face with colourful punchlines style, I assure yo ass his shit is gonna be off the heezy. His shit is mostly laced with that trademark diverse rogue beat conduction from producers Skware-1, Phrozt, MicWrecka and hqa, also two from outsidaz Funktionz and Decipher. Guest emcees include a buncha rogue boys I'm too lazy to name, plus - Ndeesaster from JKT, and Kryptik from Holland/Indo.

I guess yall iz already familiar his battle emcee side, this album will introduce you to a more well rounded Jin. Expect some honest and close to heart concept tracks to be included, backed by some really catchy beats.

Stay checking his blog for updates, and for sho' watch out this jibruary. 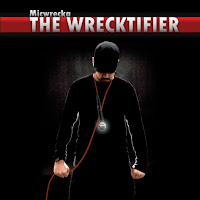 Just this month he launched his website micwreckahiphop which included a stockload of songs from the album (which can also be accessed on his myspace). What other mic wrecker you know is this generous.

Now I'm not gon' reveal too much about this album and you'd probably get some idea by checking out some of his songs anyway. What I will say is other than being a gut smacking emcee he's also sick as a beat conducta with his own distinctive style. So most of the album is produced by mr. MicWrecka himself with a sprinkle of help from others here and there. On the mic tip, he wrecks them, what else can you expect other than you know those combos on those arcade games like x-men vs. capcom or whatever and shit? yeah, that.
Posted by hqa at 5:20 AM